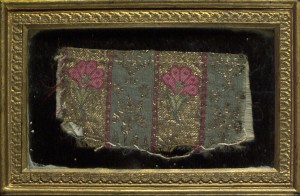 A fragment from the cloth Capt. William Kidd presented to Mrs. John Gardiner for her hospitality while visiting Gardiner’s Island in June, 1699. The cloth is composed of silk, cotton, and metallic gold and silver thread, measuring 4 3/8 x 2 1/2 in. It is said that he also gave her a clay pitcher filled with dried fruit. Kidd later returned to Gardiner’s Island, where he entrusted John Gardiner with a chest, among other things, containing fifty pounds of gold and fifty pounds of silver. It is said that John Gardiner buried the chest in Cherry Tree field on the island, where it was later retrieved. 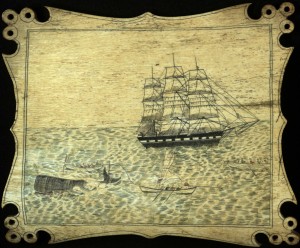 Acquired in 2015 at auction as part of a collection of whaling items belonging to the family of Capt. Philetus Pierson, this panbone, or section of the back of a sperm whale’s jaw, measures approximately 8 x 10 in. in length and is exquisitely detailed in black, red, and blue ink. Capt. Philetus Pierson, born in Southampton, N.Y. in 1801, was the captain of several whaling ships out of Sag Harbor, N.Y. in the 19th century. 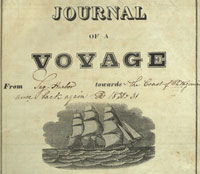 In 2009, the Long Island Collection acquired the log book of the whaling ship Acasta, making it the second example of its kind in a collection of more than 50 whaling logs. Dated June 28, 1830 – June 18, 1831, the Acasta set sail from Sag Harbor to Patagonia; written in a book specifically designed to be a ship’s log, the text records information pertaining to the sighting, chasing and killing of whales, as well as the number of barrels of oil produced. It also includes descriptions of encounters with other ships during the journey, as well as a summary of the voyage and catch. 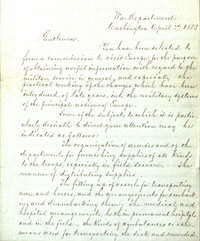 Previously unknown to staff, letters written between Jefferson Davis and the Delafield Commission were discovered in 2009 in the Long Island Collection. In 1855, Secretary of War Jefferson Davis dispatched Maj. Richard Delafield, Maj. Alfred Mordecai, and Capt. George B. McClellan to the battlefields of Crimea to observe the European military in action. American military commanders had studied European armies before, but the Delafield Commission was the most ambitious military observation mission up to that time, and the first to observe an on-going war. The commission and the members’ reports constituted an important step in the development of U.S. military professionalism. The four letters were found tucked in the book Report on the Art of War in Europe in 1854, 1855, and 1856 by Maj. Richard Delafield. The book and letters are connected to Long Island as a region because Maj. Delafield had been the Corps of Engineers’ Superintendent of the Defenses of the Harbor of New York while Davis was Secretary of War. One of the letters found is transcribed in the book’s introduction. Although the book was in the collection’s catalog, the letters had not been accounted for.